The kiddo officially got her first passport stamp! She wanted this summer’s trip to be out of the country and we made it happen. We chose to go to Toronto for our trip. We warned her that she may not get an actual stamp due to technology, but she got it. Aruba, is it too late to get my stamp?

We were originally going to drive to Canada, but hubby didn’t trust us to help with the 15 hour commute so we settled on flying. We were happy we did because that 1.5 hour flight time was amazing!
So what did we think of it? Overall we really enjoyed ourselves. There was plenty of sightseeing and shopping. This was the first country I’ve been to that did not want my measly US dollar. The currency exchange was one of our first stops. We were all amazed at the amount of diversity. It was a beautiful thing and a reminder that we need to continue exploring the world.
The city of Toronto reminded me of being on the East Coast. The houses we saw on our journey downtown were very mostly brick and they were very close to each other. Once we got downtime we discovered Yonge-Dundas Square. This could easily be compared to Times Square with the hustle and bustle of people, music, and smells.
The Toronto Zoo was something we all enjoyed. It wasn’t the biggest and didn’t have all of the animals we wanted to see, but the animals we saw were wide awake and gave us a show. There is nothing worse than going to a zoo where the animals look like they are drugged up and lonely. Mama finally got to see her kangaroos in action. I’ve tried to find kangaroos at the last three zoos I went to with no luck.
The best part of the trip was taking the drive to Niagara Falls. It is a requirement for everyone to see the falls on the Canada side at least once in their lives. The view was absolutely amazing.
The biggest disappointment was food. Everyone said how great the food is. We didn’t experience it. We had great breakfast meals. The dinners were mediocre at best.
Where to next? 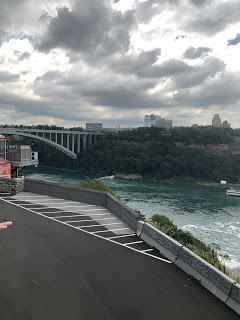